Norway has the highest share of electricity produced from renewable sources in Europe, and the lowest emissions from the power sector. At the end of 2020, the total installed capacity of the Norwegian power supply system was 37 732 MW, and normal annual production was 153,2 TWh. 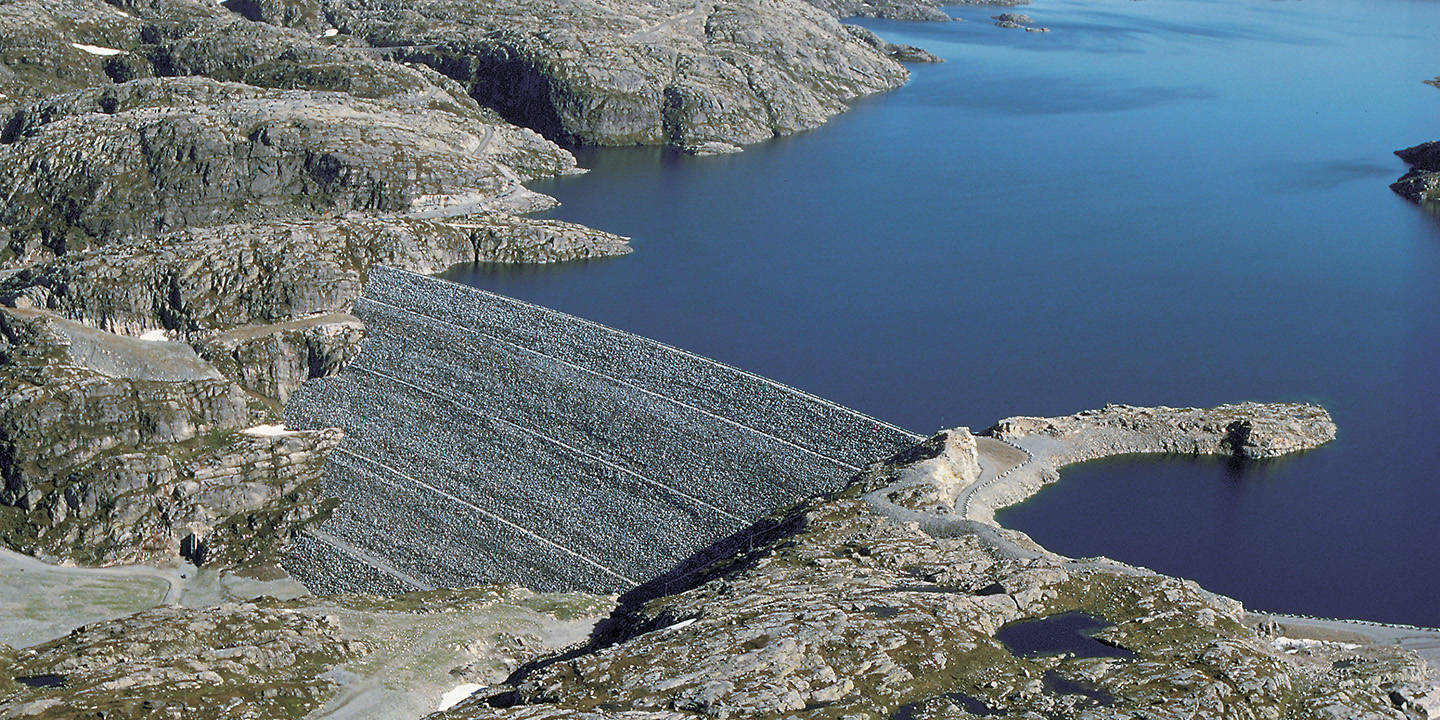 Norway has the highest share of electricity produced from renewable sources in Europe, and the lowest emissions from the power sector. At the end of 2020, the total installed capacity of the Norwegian power supply system was 37 732 MW, and normal annual production was 153,2 TWh.
Hydropower Wind power Solar power Thermal power plants The power balance

In 2020, Norway set a new electricity production record of 154,2 TWh. This is about 10 TWh more than the average over the last 5 years. Good access to water in the reservoirs and increased wind power capacity were among the reasons for the record high production.

Hydropower accounts for the most of Norwegian power supplies, and the resource base for production depends on the precipitation in a given year. This is a significant difference for the rest of Europe where security of supply is mainly secured through thermal power plants, with fuels available in the energy markets.

One special feature of the Norwegian hydropower system is its high storage capacity. Norway has half of Europe’s reservoir storage capacity, and more than 75 % of Norwegian production capacity is flexible. Production can be rapidly increased and decreased as needed, at low cost. This is important because there must be a balance between production and consumption at all times in the power system. The growing share of intermittent production technologies, such as wind and solar, makes it even more vital that there is flexibility available in the rest of the system.

The power market in Norway was deregulated in 1991, when few countries had market-based power systems. The market is now a fundamental element of the Norwegian power supply. Electricity prices provide long-term investment signals and also play an important part in  short-term balancing of supply, demand and transmission.

Renewable power plants are generally sited where there is access to resources. Production capacity is therefore unequally distributed between different regions of Norway. A well-developed power grid is vital for transmitting electricity to consumers in all parts of the country.

The Norwegian power system is closely integrated with the other Nordic systems, both in physical terms and through market integration. In turn, the Nordic market is integrated with the rest of Europe through cross-border interconnectors to the Netherlands, Germany, the Baltic states, Poland and Russia. Integration with other countries’ power systems, the well-developed power grid and the characteristics of hydropower production make Norway’s power supply system very flexible, reducing vulnerability to fluctuations in production between seasons and years.

Water inflow and installed capacity determine how much hydropower the Norwegian system can produce. Inflow varies considerably during the year and from one year to another. It is highest in spring, normally declines towards the end of summer but increases again during the autumn. Inflow is generally very low in the winter months. In the period 1990–2019, annual inflow to Norwegian hydropower plants has varied by about 65 TWh.

Norway has more than 1000 hydropower storage reservoirs with a total capacity of more than 87 TWh. The 30 largest reservoirs provide about half the storage capacity. Total reservoir capacity corresponds to 70 % of annual Norwegian electricity consumption. Most of the reservoirs were constructed before 1990. Upgrading and expansion of hydropower plants has made it possible to utilise the reservoirs more fully.

Precipitation, consumtion and production of electricity in Norway, 2019

Electricity production capacity is generally split into two categories, flexible and intermittent. If production is flexible, power plants can adjust production to market developments. Many power plants in Norway have storage reservoirs and production can therefore be adjusted within the constraints set by the licence and the watercourse itself.

More than 75 % of Norway’s production capacity is flexible.

By using storage reservoirs, flexible hydropower plants can produce electricity even in periods when there is little precipitation and inflow is low. The large available reservoir storage capacity makes it possible to even out production over years, seasons, weeks and days, within the constraints set by the licence and the watercourse itself.

A high proportion of the energy used for heating in Norway is electricity, and electricity prices and production from storage hydropower plants are therefore generally highest in winter.

Production of intermittent hydropower automatically varies with changes in water inflow. Production is high during spring and summer, when consumption is lowest.

The flexibility of power plants and reservoirs varies. Some hydropower plants with small reservoirs offer short-term flexibility, and can transfer production from base-load hours (at night) to peak-load hours (daytime). Hydropower plants with larger reservoirs can store water for longer periods so that they produce electricity in winter, when consumption and prices are highest. Norway’s largest reservoir, Blåsjø, has a capacity of 7.8 TWh and can hold three years’ normal inflow. However, when the hydropower plants are working at full capacity, the reservoir could be emptied in 7–8 months. Very large reservoirs like Blåsjø are intended to store water in years when precipitation is high for use in drier years. Much of Norway’s reservoir capacity is concentrated in the mountains in the southern half of the country (in the counties Telemark, Rogaland, Hordaland and Sogn og Fjordane), and further north in Nordland.

Reservoirs make it possible to manage water use to maximise income from the available water resources. For society as a whole, the aim is to spread production so as to make optimal use of water inflow over the year, or in some cases over several years. To ensure that this happens, there must be financial incentives for producers that reflect the underlying physical conditions. The market therefore plays an important part in ensuring efficient management of water stored in the reservoirs.

The variable costs of hydropower production are low, since water, the actual energy source, is free. An owner of a run-of-river power plant will therefore be willing to generate electricity even if the prices is only just above zero. The same principle applies to intermittent production technologies such as wind and solar power. Intermittent production is generally independent of price, but varies with weather conditions. Thermal power production, for example at coal-fired, gas-fired and nuclear power plants, is profitable provided that the electricity price covers the production costs at the time of production. These depend to a large degree on the prices of coal, gas and CO2 emission allowances.

Hydropower producers who can store water will assess the situation differently. They constantly need to consider whether to produce electricity immediately, or to retain the water in reservoirs. It is the difference between the current and the expected electricity price that determines whether it is profitable to store water for short or longer periods.

It is challenging to manage storage reservoirs, because it is impossible to be sure how inflow will vary in future or how market conditions will develop. Reservoir management therefore requires considerable local knowledge and the ability to interpret changing, complex and uncertain information on inflow, consumption and market developments.

At Norwegian storage hydropower plants, production is also regulated in line with short-term price developments, which are closely related to the volume of intermittent power production in the other Nordic countries and the rest of Europe.

It is also necessary to maintain a balance in the power supply system as a whole as production and consumption change during the day and within each hour. Hydropower production can be rapidly regulated up and down at relatively low cost. In thermal power plants, on the other hand, it can be time-consuming and costly to regulate production. This means that Norwegian power plants are useful for meeting the short-term need for flexibility, which is growing because the share of intermittent production is increasing in Nordic and other European power supply systems. Well-functioning, integrated markets and a well-developed power grid are an essential basis for this.

At the beginning of 2021, there were 53 wind farms in Norway, with an installed capacity of 3 977 MW. This corresponds to about 13.1 TWh in a normal year. Production from wind power plants fluctuates with weather conditions. Wind conditions can vary a great deal between days, weeks and months.

Norway’s first wind farm has only been operating since 2002. Smøla wind farm originally had an installed capacity of 40 MW, but this was increased by 110 MW in 2005, after the second construction phase. Investment in wind power has increased substantially in recent years. At the end of 2017, almost 5.4 TWh was under construction.

At the beginning of 2021, the total installed capacity for solar power was 160 MW in Norway. Statistics from Elhub shows that almost 90 per cent of the installed capacity, which corresponds to around 7 000 photovoltaic systems, was connected to the Norwegian power grid. The statistics also show that even though 85 per cent of the photovoltaic systems are plants of less than 15 kW, these account for only a third of the production capacity. 28 per cent of the grid-connected solar power capacity is located in Viken county. After Viken comes Vestfold and Telemark and Trøndelag with 12 and 11 per cent of the production capacity, respectively.

Development in installed capacity for solar power in Norway

Norway’s thermal power plants accounted for about 2 % of total production capacity in 2020. Many of them are located in large industrial installations that use the electricity generated themselves. Production therefore often depends on the electricity needs of industry. These power plants use a variety of energy sources, including municipal waste, industrial waste, surplus heat, oil, natural gas and coal.

There are 30 thermal power plants in Norway, with a total installed capacity of about 700 MW, and for the past fewyears their production has been relatively stable at 3.4 TWh.

The power balance expresses the relationship between production and consumption and indicates whether the Norwegian power system is a net exporter or importer in a particular year. There are wide variations from year to year, and the results have varied by about 25 TWh in the last five years alone. Generally, consumption fluctuates with temperature and production with water inflow and wind conditions. The underlying situation in the Norwegian power supply system can be illustrated by comparing Norwegian production capacity in a normal year with electricity consumption corrected for temperature, as in the figure below.

At the beginning of the 1990s, there was a considerable surplus in the Norwegian power supply system, which became apparent when the market was deregulated. This was followed by a period of falling investments in new electricity production and relatively high growth in consumption, resulting in a reduction in the power surplus by the early 2000s. After the 2008–2009 financial crisis, the power surplus has increased again as a result of weaker growth in consumption and higher electricity production.

The difference between mean annual production capacity and consumption corrected for temperature has varied from 5 to 11 TWh per year. New investments have largely been driven by the electricity certificate scheme.

At the end of 2020, about 6.2 TWh of new production capacity was under construction. Of this, 4 TWh is wind power and 2.2 TWh hydropower.

Even if the power balance is good, power supplies can at times be affected by low water inflow and events outside Norway. Security of supply was in focus in winter 2009/2010, when there was a combination of cold weather, low inflow and a substantial reduction in the availability of power from Swedish nuclear power plants. In winter 2010/2011, reservoir levels were extremely low, and in certain specific hours, electricity prices reached record levels after a long period of low temperatures and low inflow. However, the power supply system was able to meet demand. High prices were important in encouraging lower consumption, higher production and more import of electricity.

Wide variations in inflow are becoming less of a problem with the increase in power exchange capacity with systems dominated by other energy sources. Power trade therefore plays a key role in the Norwegian hydropower system, and is important both for security of supply and for value creation.