Industrialisation and the development of modern Norwegian society became possible when people learned to use moving water in rivers and waterfalls to generate electricity. 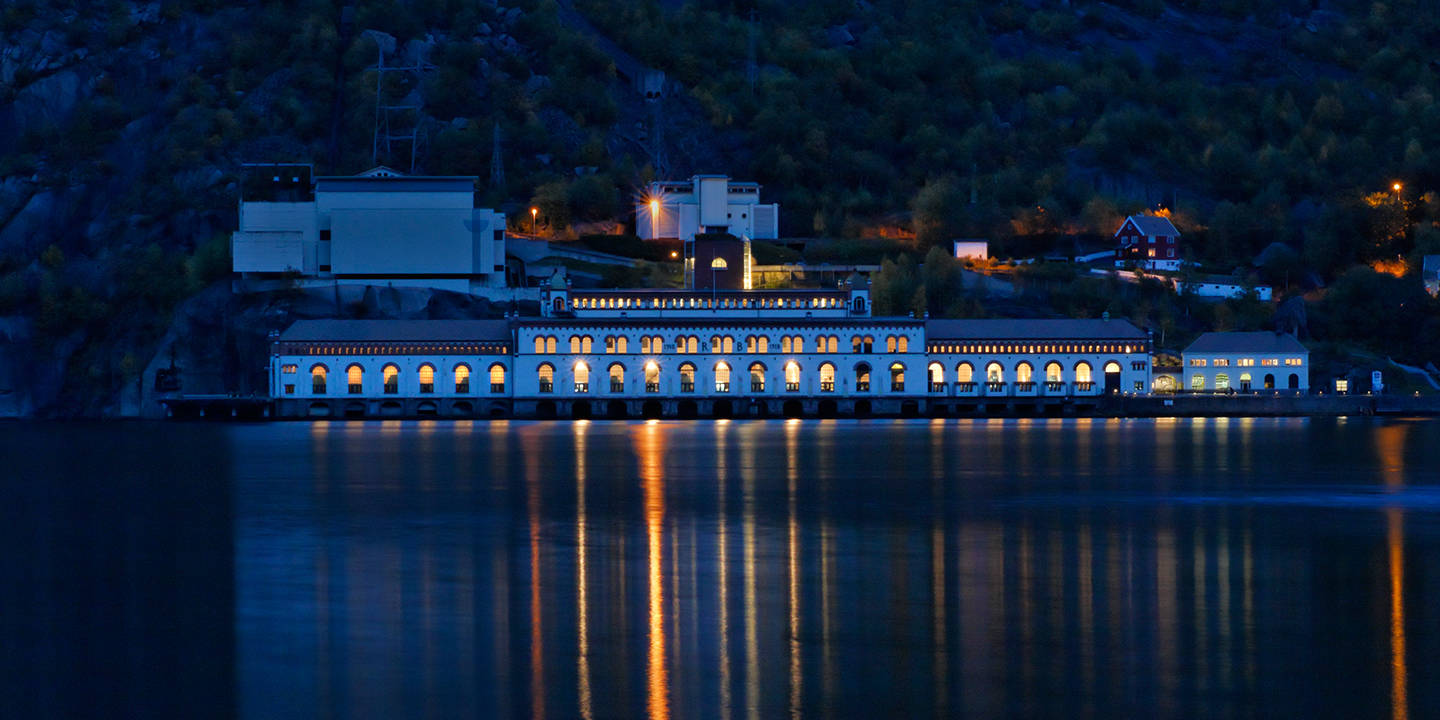 Industrialisation and the development of modern Norwegian society became possible when people learned to use moving water in rivers and waterfalls to generate electricity.

Increasing access to modern forms of energy in Norway has been accompanied by economic growth and a general rise in living standards. At the start of the 20th century, electricity was still a luxury, and other energy sources were much more widely used. Most people were still using paraffin and gas lamps or candles for lighting and heating their houses with wood, peat, coal and coke.

Increasing access to modern forms of energy in Norway has been accompanied by economic growth and a general rise in living standards.

From about the mid-1800s, Norway’s largest towns developed pipeline networks that supplied gas for street lighting and lighting in larger buildings. The gas was produced by gasification of coal and coke, and gasworks were established in many places between 1848 (in Oslo, then called Christiania) and 1913 (in Lillehammer). As time went on, gas was also used for other purposes than lighting, and the gasworks in Bergen became the country’s largest. In 1954, it delivered gas to 44 914 devices, mainly for heating water and cooking. Mains gas was an important part of the Norwegian energy supply system for many years. The gasworks in Oslo and Bergen were the last two remaining in operation, and closed in 1978 and 1984 respectively.

Electricity began to compete more strongly with gas from around 1900. The first power plants were established by private companies, often for industrial purposes. Norway was rapidly becoming an industrialised country during this period. By 1930, energy use in the energy-intensive manufacturing sector had reached almost 6 TWh a year, and this corresponded to three-quarters of total Norwegian electricity use.

There was growing recognition of the advantages of electricity, especially in towns. Using coke, coal and wood for heating and cooking caused environmental problems and resulted in poor air quality in towns. Hammerfest was the first town in Norway to establish a municipal electricity system, in 1890, and a number of other municipal electricity companies were established in the next decade or so – Oslo in 1892, Bergen in 1900 and Trondheim in 1901. In the early years, many electricity companies used coal-fired steam generators. Electricity was mainly used for street lighting, but customers who could afford it could pay to light their homes with arc lamps and incandescent light bulbs.

As time went on, there was a growing demand for access to electricity for more people and larger areas of towns. Both production and consumption rose, and hydropower became more important. In the 1920s and 1930s, electricity was taken into use for a wider range of purposes. More and more people were able to buy labour-saving appliances such as electric irons, cookers and radiators.

In the 1920s and 1930s, electricity was taken into use for a wider range of purposes.

In the post-war period,both hydropower production and electricity consumption expanded rapidly. By 1960, almost all Norwegian homes had an electricity supply, except for a small number in the northernmost county, Finnmark. Electricity was used for a variety of appliances and for heating, but oil and wood were also still widely used for heating.

In the same period, the manufacturing sector continued to grow and become a more important part of the economy. By 1970, energy use in the sector had reached about the same level as today. However, electricity consumption was rather lower, indicating that the energy mix has changed since then. Oil products were the next largest energy carrier. The oil crisis in the 1970s had major consequences for Norwegian oil consumption, which dropped markedly. There was a rise in electricity consumption at the expense of oil, especially for heating and in manufacturing.

In the 1970s and 1980s, there was growing opposition to new hydropower developments because of environmental concerns. This also resulted in greater awareness of the potential of energy efficiency measures and the development of district heating. District heating and other alternatives have expanded more rapidly since 2000. There are now district heating networks in most Norwegian towns, and heat pumps supply buildings with energy totalling about 10 TWh per year. Recent developments also include the construction of gas-fired power plants and wind farms. However, hydropower still dominates the Norwegian electricity supply system.